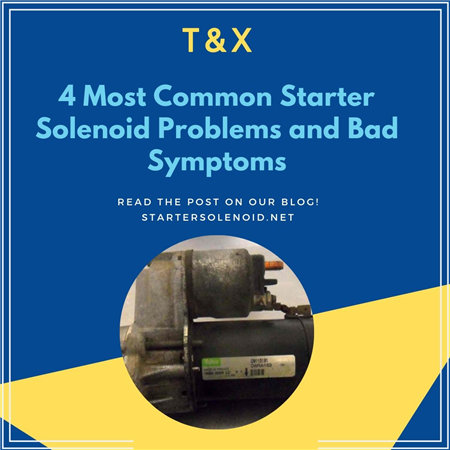 A starter solenoid is a major component of an automotive starter system. It helps in starting the engine by performing two functions:

1. Acting as a switch to deliver a high current from the battery to the starter motor.

2. Using the electromagnetic force created when current flows through its windings to produce a mechanical movement. The movement drives the pinion, engaging it to the ring gear of the engine’s flywheel.

The starter solenoid is, therefore, an important component of an engine’s starter system.

It has to function well for a car to start.

But it sometimes becomes faulty, and any attempt to start the engine becomes unsuccessful.

There are 4 most common starter solenoid problems. 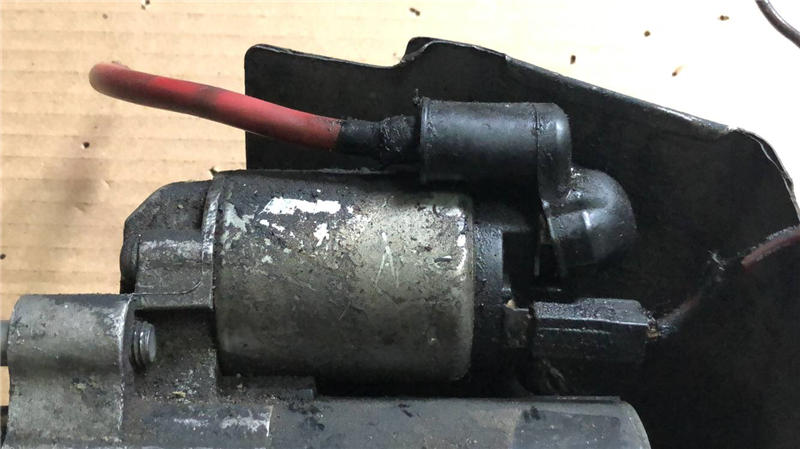 #1.The starter solenoid failing to reset, even upon releasing the starter button, or turn the car switch in the off position, the starter continues to operate.

#2.The sucking action of the starter solenoid failing from time to time.

#3.The drive gear failing to restore in time, leading to it being driven by the flywheel ring gear reversely. This problem results from a return spring that has become too weak from repeated use.

#4.The starter solenoid failing to work up the starter to cause rotation. It only makes a series of sounds without starting the engine.

What Causes a Starter Solenoid to Become Faulty?

Reasons for a bad starter solenoid vary. Some causes act singly and others in combination. They include the following.

Poor and hurried wiring lead to either inadequate current supply to the starter solenoid or a more dangerous problem of shorting. Both can make a starter solenoid to malfunction and cause starter system problems. Bad wiring instances include terminals that are left loose or connected the wrong way.

It happens when extremely high currents flow to or through the solenoid, and for too long.

It can be caused by instances where the ignition switch is left in the ‘start’ position for long.

The soldering in the contacts melts, and they weld together.

When that happens, the starter solenoid becomes damaged because you can no longer control its switching function.

If moisture is left to get inside the starter solenoid, it leads to corrosion of the electrical contacts.

The result is reduced conductivity of the contact surfaces.

You may hear the starter click and then stop almost immediately when the current proves too low for the whole operation to finish.

Too Much Tightening of Bolts And Other Fasteners

It’s usually very easy to over tighten bolts without being aware of it.

It happens especially if you’re using tightening tools with a high torque, which causes some parts inside and outside of the starter solenoid to break or bend.

It can lead to shorting or mechanical failure of the affected parts.

The starter solenoid is just one of the components of a starter system.

While a problem with starting the engine may be as a result of it being damaged, it’s not always the case, and learning how to diagnose a faulty one is important.

So, how do you tell that it’s your car’s starter solenoid that’s bad? Here are indicators to help you in ascertaining that.

Symptoms of a Bad Starter Solenoid

A starter solenoid that’s faulty exhibits various symptoms. Some of them are straightforward while others require keenness to detect. Often, a bad starter solenoid will have the following signs.

#1: A series of rapid or successive clicks coming from the starter solenoid

It indicates a situation where the holding coil of the solenoid keeps holding back, mostly as a result of not enough current reaching the solenoid.

It can be caused by loose connections or corroded terminals. It can also be a sign of contacts that have welded together, or that have become worn out. It means the solenoid’s efficiency has been compromised and it isn’t operating strong enough to produce the required force to cause mechanical movements.

#2: The starter continues to rotate even after the drive gear disengages and start button has been released from the ‘on’ position

This is a symptom of burnt out contacts. It results from the contacts being exposed to high currents and heat over time causing the surfaces to melt and fuse together. If left unattended to, it can lead to more damage to the whole starter system by subjecting it to unceasing and dangerously high current.

#3: The starter solenoid makes a clicking sound and moves a little, but the starter does not rotate

It could be a result of a starter solenoid that’s broken or a defective solenoid-starter connection. Or it can be a case of decreased electrical conductivity due to corrosion, dirt, and breakages.

#4: The starter continues to rotate after the start button has been released, but the drive-gear doesn’t reverse

It indicates burnt out contacts that remain closed even after the ignition switch is taken back to the ‘off’ position.

It can also mean an immovable return spring due to lost elasticity from repeated use.

What to do if a starter solenoid appears to be bad

Some minor faults like loose terminals can be remedied by making simple repairs.

Major damages, especially the ones involving the inside of a starter solenoid may warrant its total replacement.
Before making final diagnoses that your starter solenoid is the one causing starter failures or any other problem with starting the car, you would need to test it. Often, this is done with the help of a multimeter to determine if the starter solenoid is working the right way.

The possibility of the battery be the cause of the starter fault should also be ruled out.
It can be done by testing the battery itself, or by ensuring the one you’re using is in excellent condition. If in doubt, you can even replace the existing battery with a new one, especially if the current one has been there for too long.